The Princess continues her search for the perfect Pea ...

There are a few books which have had a significant, lasting impact on my life.  Like many I suppose, there are a number from my most earliest memories - those first books, fables, allegories - anything with a deeper meaning than what was presented in the text - that seated themselves deeply into my subconscious, better to remain hidden until the precise moment when the lesson was needed.

Dr. Seuss had an impact.  As did the Brothers Grimm (who truly were!).  "Are you my Mother?" my first Suess with impact.  Now don't read too much into that - I definitely knew who my Mother was.  At times, perhaps, I was the Saffy to her Edina - something that manifested itself in my early teens. 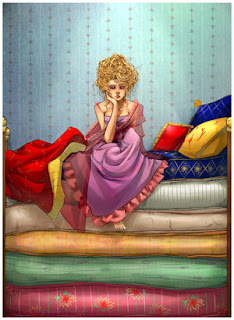 The Princess and the Pea was another best seller in my psyche.   I still have the large hardbound, fairy floss coloured book about the Princess caught in the rain and presenting herself to the door of the castle on a dark and stormy night.  Her claim of being a Princess at first falling upon excited ears, the Queen overseeing her son, the Prince, and looking forward to his ultimate matrimony.  However, being the rather cautious Kardashian queen that she was, seeking to ensure that the bedraggled bohemian lass was indeed a bedazzler in disguise, set out to prove the claim.  She piled her guest's bed with a single pea, topped with dozens of feather mattresses.  The theory being of course, that a Princess' bottom would be so sensitive as to feel the offending vegetable. (More on that another time).

Of course, in the morning, our Princess truly did reveal herself to be authentic, as she graciously complained (is there such a thing) of the fitful night spent at the mercy of an uncomfortable lump in the bed (again, more on that later) - and they lived happily ever after.

So where in the hell is this going? (I hear you shout)  Well - let's put it bluntly - I'm a Princess open and hopen' to find her Prince.  And over the last week, I've slept in many beds, and have yet to find a Pea.  So tonight is yet another B&B, in another part of England (where all good Princesses can be found) and I live in hope.

Love, Me
Posted by Cynthia Copeland at 5:01 AM