·         It’s my birthday today.  Yeah for me.  I may not be entirely environmentally friendly (depending on your environment, I suppose) but I like to think I’m damned entertaining
·         The sweetest assistant on the planet has been looking after me – I’m in the same hotel as I was 3 weeks ago, I guess I’ve kind of grown on her – whatever the reason, this little miss, Molly, ensures that I have fresh coffee (‘not the pot, it’s old!’), let me know when it was her day off on Friday, carefully handing me over to another person (‘she will take care or else trouble’) and presented me with 4 perfectly delicious chocolates this morning.
·         The Metro in virtually all cities I’ve visited is truly the best and easiest way to get around.  The exception being Western Cities such as New York, London, Sydney, Paris – where there may be a metro, it may be easy to work out where you are and where you want to be, but it will be disgustingly dirty, hot, smelly, graffiti’d – democracy at its best.  How shameful.
·         That’s not to say there’s not a bit of danger in Shanghai.  Taxi’s / taxi drivers are wonderfully dangerous.  No seatbelts.  Manual transmission.  Mobile phones.  A blatant disregard for traffic lights.  All combine into frightfully anxiety filled journeys.
·         Speaking of which, the Chinese have worked out INSTALL but not INSTIL.  Case in point:  They have installed pedestrian crossings and little green men lights but have not yet instilled the appreciation of same by vehicles.  So when the green man says ‘safe to cross’, take it with a grain of salt and only cross when you’re completely sure you can do so without getting hit by a bus.  They don’t stop.  Seriously!!  Public service announcement here…
·         Shanghai airport duty free is actually cheaper than you can buy elsewhere – very rare in international airports these days. 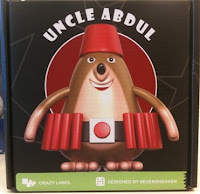 ·    Political correctness has no place in China (yeah!!) as the toy pictured here and found in an airport shop can attest (Mr Potato Head meets radical Islam) – I’ve given it the following tagline:  “seconds of fun – an eternity of virgins”

Posted by Cynthia Copeland at 3:40 PM