LOST: The Art of Conversation

During this extended tour of Europe, I am encountering a disturbing trend which I plan on avoiding at all costs in the future.  In restaurants and bars of all ilk, price points, cuisine and theme, the tables are regularly filled with middle aged couples on holiday, and for whom the simple act of engaging intelligently with each other on any topic -- other than the weather, the cost of everything or how their back is killing them after all those bloody stairs they chose to climb -- seems to elude them.  In a room of 15 tables, no fewer than half will be populated by those who have apparently lost the ability to hold an interesting, topical, engaging conversation. 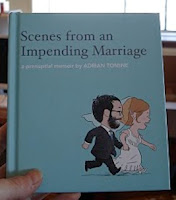 Yes, I'm listening in.  In Paris, where I am now, this is not such a stretch as most tables are placed virtually on top of each other.  You are so close to the folks around you, you may as well join them.  But I resist because once I've heard the absolute drivel spewing forth, I simply stare ever more intently at my steak tartare.  Which, as an aside, is a gift that continues to give 18 hours later.

This afternoon, I ducked into one of my favorite hotels for an aperitif before heading off to dinner.  At the table next to mine, the typical example of what I refer to above.  A couple in their mid 50's, he's on a business trip and evidently she's been given the distinct privilege of coming along for the ride.  Their interaction goes something like this:

Him: "What do you want to drink?"
Her: "A glass of wine."
Him (to the waiter): "Two glasses of the house white please."
Him: "My back is killing me, those stairs at the Trocadero really got to me."
Her: silence
Him: "By the way, did you pay the mastercard bill?"
Her: "Yes."
Him: "Probably should check if the hotel can arrange a car for Tuesday."
Her: "Hmm."

This exchange went on in a similar fashion for 73 minutes.

You're in FREAKING Paris!! Have a PARIS conversation - ask for opinions, thoughts, ideas!  Wonder together at the marvel of this city, how it's held the world's attention for so long, how the Parisiens have turned having a coffee into a spectator sport with their little tables on every sidewalk.  How the buildings are museum pieces in themselves!  Something, give me ANYTHING, that communicates that you're actually living in the now and sharing an experience!!!

Conversation coaching should be mandatory for everyone.  I'm going to write to someone about making it a law.  In the meantime, I'll step down from my soapbox.  Besides, I need to use the loo again.

Love, Me
Posted by Cynthia Copeland at 5:50 PM