From Russia with LOVE!

This blogging thingy so many folk do, including moi, is fueled by any number of needs and variables, artfully (sometimes not so much) combined with technology, resulting in ever increasing 'mind burps' that fortunately or un make their way into the accessible ether.  Hence what follows.

Today I learned (learnt, learnded, discovered, okay - fell across) something new which, like the air that accumulates undesireably in one's belly after a particularly challenging bowl of Malaysian Laksa (never say yes to the cockles), has surprised me enough to let one rip.

Within the Google Blogger control panel is a tab (which I discovered today) which gives you a range of statistics relating to your blog.  As the graph below highlights, the majority of hits to my blog are coming from the former U.S.S.R. 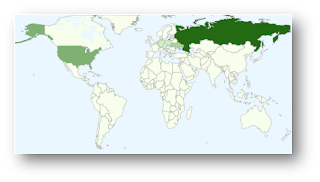 Now despite having had a wild affair with a Russian cyclist in 1984, followed by several fervent letters to the Kremlin begging for an end to the Cold War and for the wall to come down (yes, I take credit for both of these events), in order that true love could prevail, I haven't recently given the old red centre much thought.

It's nice to know they're still thinking of me, however.  That Putin chap's a bit of a hunk in any case...

Love, Me
Posted by Cynthia Copeland at 1:44 PM